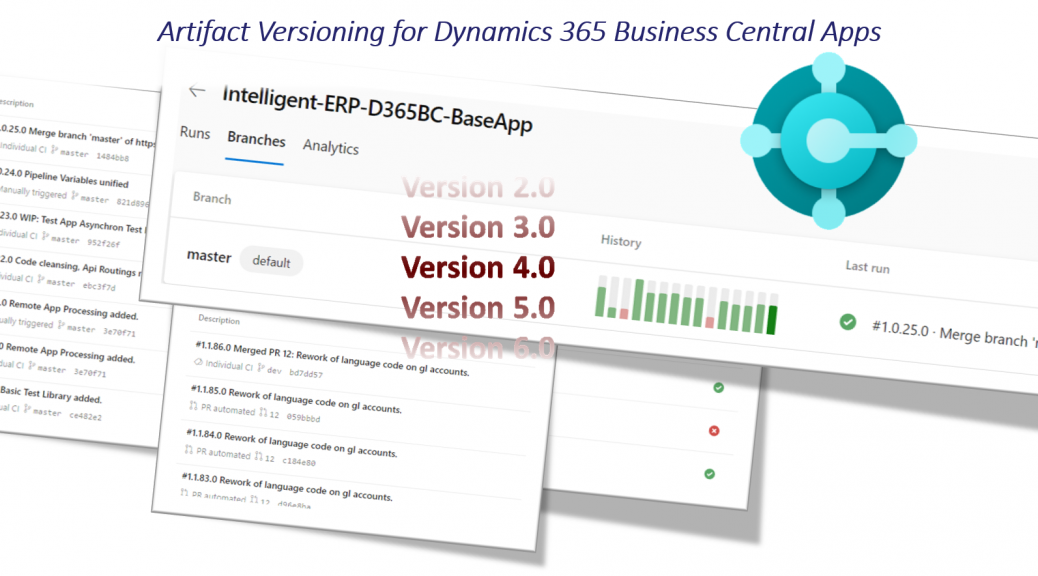 Classic NAV development processes, customizations with C/Side became obsolete in the Business Central age was replaced by Apps. Apps have version numbers to identify which app version is newer, handle updates and finally synchronize data changes in the right order.

New App Versions are produced by fully automated CI processes in a very short time and the generated Artifacts replace the installed version in target environments during automated CD processes.

The application version helps to keep the necessary overview and answer the question: “Which App is installed at my target environment?“

The Application Version is defined in the app.json by 4 numbers/parts:

A major version identifies a new major release – something has been changed totally:

The change of minor version shows you:

Mostly a change of major or minor version indicates a “Breaking Change”. Your App have to implement an Upgrade CodeUnit and provide code to upgrade existing data to the new structure.

Each CI Build generates a new Artifact and a build version makes the combination of “[major].[minor]” unique.

The revision can be set normally to 0. When the branching model and release strategy require to show the origin of a hotfix – used this notation:

Each new compiled App needs a unique number, independent if the artifact is used for a release or not. The following versioning works fine for my projects:

[Major] and [Minor] are defined and changed in the project. [Build] is automatically incremented by each CI-Build for the latest [Major].[Minor] combination and starts by 0. This will be calculated by the pipeline.

An automated CI-Build (CI-Pipeline) can be triggered from a Commit on a Branch like ‘master’ at the Source Repository. Such triggers are defined in the respective pipeline yaml file. My pipeline uses the trigger parameter path and is only invoked when a changed file was committed at the app or test folder:

Another way is to setup a Branch Policy with Build Validation which trigger the assigned pipeline on each Pull Request:

Azure DevOps support expressions like counters in Azure pipelines. Such counters can be used to calculate the automatic incremented Application Version for each build. The following yaml snippet show my global pipeline variables responsible for the for CI-Versioning of an Dynamics 365 Business Central App:

These variables are used for the pipeline tasks. My compile task (yaml) for the Dynamics 365 Business Central App with use of the generated Application Version based on ALOps is:

For my tests I have included also the source branch name to see the reason of the CI Build – Pull Request or Branch Trigger. Later I discovered this information was already displayed:

I’ll continue my series soon… One of my next posts will cover my preferred Branching model, I’ll share some insights, why I use Universal Packages for my Artifacts and where you can use “Badges” for documentation. So, stay tuned!

I like to read your comments, suggestions, and be curious if this fits into your process. Do you use the same App-versioning and automation for your Apps?